Light distribution of outdoor luminaire and their applications

There are many important factors to consider when choosing the right LED outdoor luminaires: lumens per watt, heat dissipation, power performance, warranty, color temperature and color rendering index are all very important, as well as the light distribution. Light distribution is basically a projected pattern of street lights and floodlights throwing light onto a surface. If you know how to lay out your light fixtures based on using the right LED light and the correct light distribution, you will get better lighting effects where you can reduce the number of LED light fixtures and wattage at the same time. This is not only conducive to the planning of the project, but the project must also be very energy efficient and meet the project requirements. Therefore, the correct light distribution of LED light is very important for outdoor luminaires.

BUG rating as per IESNA

Luminaires were assessed and classified for light trespass, sky glow, and high angle brightness potential of a luminaire using the LCS described above. The lumen limit per secondary solid angle establishes a BUG rating for the luminaire. Tables 3, 4 and 5 show the individual secondary solid angles, along with the corresponding lumen limits for each of the different components. Outdoor luminaires are assigned a BUG rating by comparing the lumen output of the luminaire’s backlight, uplight, and glare areas to the maximum lumens allowed in these tables. Ratings for B, U, and G range are from 0 (most limited) to 5 (most lenient). For example, the most common, we hope that the uplight of the street light is o, which has less impact on the environment. At the same time, on highways or country roads, we hope that there will be less backlight, because in these places, the existence of backlight is basically meaningless.

Cutoff as per IESNA

This light distribution classification is mentioned on IES LIGHTING HANDBOOK 9TH EDITION. However the LCS supersedes the previous IES cutoff classifications of full-cutoff, cutoff, semi-cutoff, and non-cutoff. But we can still find it in the IES files of LED light. So let’s briefly introduce something about it.

Full Cutoff – A luminaire light distribution with zero candela (intensity) at an angle of 90 degrees or above. Additionally, the candela per 1000 lamp lumens does not exceed 100 (10%) at a vertical angle of 80 degrees. This applies to all lateral angles around the luminaire.

Semi-Cutoff – A luminaire light distribution where the candela per 1000 lumens does not exceed 50 (5%) at an angle of 90 degrees or above nardir. Additionally, the candela per 1000 lamp lumens does not exceed 200 (20%) at a vertical angle of 80 degrees. This applies to any lateral angle around the luminaire. (In some cases the semicutoff distribution may meet the requirements of the noncutoff distribution.)

Non-Cutoff – A luminaire light distribution where there is no candela restriction at any angle. This means there will be light intensity at an angle of 90 degrees or above.

Street light fixtures are designed to produce fairly uniform illumination across streets and roads. They are usually mounted on arms on poles. Nowadays, LED street lights are gradually replacing HID and sodium lamps for street and road lighting. In addition to the advantages of LED itself, the development of LED light distribution makes LED street lights more reasonably evenly distribute light on the road. Usually a wide vertical light distribution allows for larger pole spacing, and a wide Lateral light distribution is suitable for wider road lighting, but may be more prone to discomfort and disability glare due to the high-angle luminous intensity. For this reason, the luminous intensity distribution can have a maximum limit at angles above 75° from the nadir. These are mentioned in IESNA Type.

LED post top lights are generally used in parks, country roads, hotel roads, pedestrian areas, residential roads and parking lot lights. They are normally mounted on top of the post and creating an illuminated area in the adjacent area. This is the reason it calls post top light. Due to the particularity of its lighting place, it not only meets the lighting requirements, but also takes into account the aesthetics. Of course, its light distribution is also important, usually Type I, Type V, and Type 1MS are often used, because the roads here are generally narrow, so the narrow lateral lighting distribution is more suitable for lighting in this area. Again, Type V is suitable for this kind of place, because we only need to illuminate the area under the light fixture, similar to parking lot lighting.

The luminous intensity distribution of sports lighting fixtures is generally very narrow, usually installed on the edge side of the court, and it is much higher than the sports area. Like football field lighting, tennis court lighting, baseball field lighting, etc. Its light distribution as well as floodlights which will be talked later are all mentioned in NEMA’s light distribution system. Some of the lamps for stadium lighting have a medium distribution, and some require a narrow distribution. The use of narrow intensity distribution luminaires almost always requires careful design to ensure correct beam overlap and proper horizontal and vertical illumination. Since aiming is a critical part of their application, these luminaires are often equipped with special aiming and locking devices.

These luminaires are often used in architectural lighting and other specialty applications. These applications require luminous intensity distributions ranging from very narrow to very broad, depending on the angular size of the illuminated object and the desired effect. The light intensity distribution can be symmetrical or asymmetrical. The luminaires used for building exterior lighting can be narrow or wide, depending on the part of the building that is illuminated and its distance from where the luminaires are installed. Column lighting, accent lighting and distant mounting locations require narrow distribution. Large area lighting close to the installation site requires a very wide distribution. The lighting of billboards and parking areas sometimes requires a wide asymmetric spectrum to achieve good lighting effects. 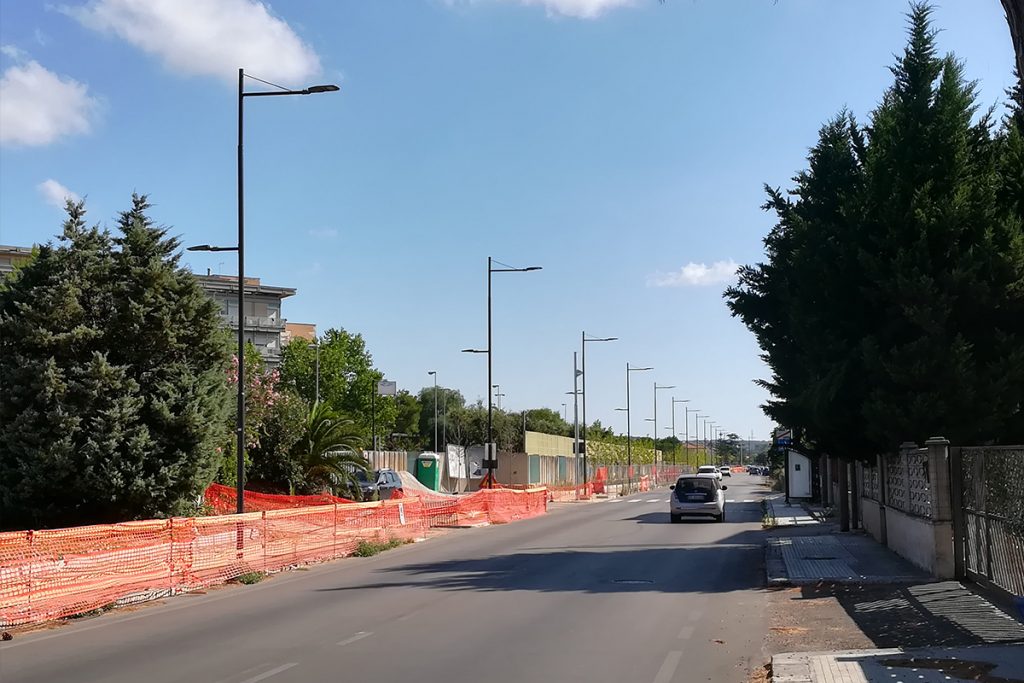 Where E is the the LUX level achieved, L is the lumens output form the light fixture, UF is the utilization factor of space, which takes into account the reflectivity of the surface of the space, and MF is the maintenance factor of the luminaire, which allows for a certain amount of light depreciation over time.

It is clear from this formula that the experienced light level is reduced by two factors, the maintenance factor of the luminaire and the utilization factor of the space.

Type IV light distribution luminaires are known as forward throw or asymmetric luminaires. Like Type III luminaires, these luminaires cast light 2.75 times their height. But they create a more circular distribution pattern that pushes the light outward, with less light falling behind the fixture. This kind of lighting distribution are more suitable in parking lot, square or other area lighting.